You Are Here: Home » Business » Don’t Let Your Business Fail Like HMV- Keep On Top Of Changing Industries

As a business owner, no matter what it is your company does, you need to stay on top of changes […]

As a business owner, no matter what it is your company does, you need to stay on top of changes in the industry in order to avoid being left behind. Because of the internet huge changes have occurred in many industries, forcing them to change their business plans and completely revamp. One company that can be accused of not staying on top of their game is HMV- the worldwide CD and DVD retailers.

Where Did HMV Go Wrong?
HMV first opened in 1921 and have had solid growth ever since. There has always been high demand for hard copy CD’s and DVD’s until recent years. Due to the increase in the use of the internet with nearly everyone in the UK being online; the way in which we listen to music and watch films has changed.

We live in a world where we expect to get what we want straight away, we have little patience and expect to do everything as quickly as possible. This is why companies such as Love Film, Itunes, Groove Shark and Spotify have become so successful, and HMV less and less successful.

With online companies offering the option to download films and music within seconds enabling as to use something almost as soon as we decide we want it, HMV didn’t really cut the mustard anymore. Yes HMV set up an online store, but this online store only offered hard copies that would take several days to deliver. HMV just didn’t keep up with the changes in the industry and their competitors.

What Should They Have Done?
HMV should have followed their competitors and bettered them to stay ahead. They were advised to make films and music available to download online from their website, but bizarrely they decided to ignore this advice and to continue focussing on selling hard copies.

HMV made a huge mistake in not adding the option for customers to download films and music from their website, had they done this they may have stood a change. By ignoring the obvious changes they set themselves up for a fall. 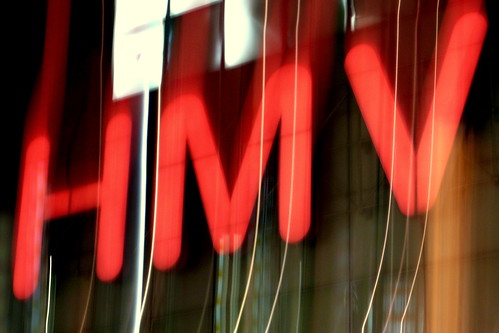 How To Ensure You Don’t Fall Into A Similar Trap

As a business owner you need to outline your competitors right from the word go. How can you stay one step ahead of them if you don’t firstly know who they are, and secondly what it is they are doing. Even if you are a starting a new business and feel as if you are starting on top of all your competitors, you need to be constantly aware of what is they are doing. To put it simply if your competitors are all doing something, and you’re not, it’s possible you have been left behind and need to play catch up. It’s a slippery slope and once you begin to get left behind you have to work very hard to catch up again.

Rather than getting left behind at all, always stay ahead. Really get to know your industry, keep a constant eye on your competitors and go to as many industry shows, talks and conferences as possible

Eilidh MacRae is writing on behalf of New Business and would reccomend them for business advice for new businesses and current businesses.