You Are Here: Home » Travel » Highlights Of Venice Beach

Venice Beach, a suburb of Los Angeles just south of Santa Monica, was created in the early 20th century by […]

Venice Beach, a suburb of Los Angeles just south of Santa Monica, was created in the early 20th century by a developer named Abbot Kinney, who wanted to create a centre of culture along the lines of the original. To this end he began work on a small canal system, and imported some gondolas from Italy. It didn’t end up quite the way he imagined, but still has become one of America’s most well-known holiday destinations. The area’s most popular street was given Kinney’s name as a mark of respect, and that name-change served as the impetus for its regeneration from a run-down area into one of Venice Beach’s most vibrant spots, now lined with art galleries, swanky restaurants, bars and high-end boutiques.

The town became a counter-cultural hangout in the 50s, when the Beat Generation made it their home, and also during the 60s when the Doors would live and perform here. Legendary B-movie director Roger Corman had some of his film production facilities here, and the Zephyr team developed aerial skateboarding in the disused swimming-pools of nearby Santa Monica, revolutionising the sport in the process. Quite an eventful history all-told, and no doubt the reason Venice Beach keeps packing in the tourists.

What to do when visiting? Here are some highlights you’d be mad to miss: 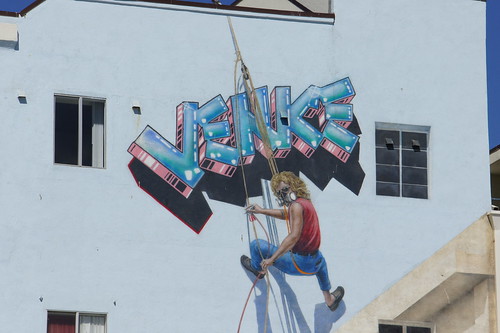 Venice Beach is one of the biggest hotspots for street art in the United States. Dozens of murals by artists such as Rip Kronk adorn the buildings in every neighbourhood, and make for fantastic photo opportunities. A conservation society has been set up to look after them, such is their reputation and draw for tourists. The most popular include one of a bare-chested Jim Morrison, and recently A Touch of Venice Beach, inspired by Orson Welles’ classic film A Touch of Evil starring Charlton Heston, most of which was filmed here.

Unfortunately just as Kinney was finishing his epic canal project, the era of the automobile dawned and now redundant, many of the waterways were filled in during the 20s to become roads. However 6 of them remain, and were recently restored. There is a fantastic community along the shores, and the best time to visit here is definitely during the summer when the trees are in full bloom and the whole place takes on a serenely beautiful aura. Explore the renowned architecture of some of California’s finest homes here, or take an enjoyable ride in a gondola.

In the 1930s the council provided some basic acrobatic and weight-lifting equipment to the beach-users. The area known as Muscle Beach became a massively popular hang-out for keep-fit fanatics and show-offs. it has since been moved to a slightly different place, but retains its reputation. Body-builders and athletes meet here regularly to pump iron and stay flexible. Among the famous who have worked-out here among the spectators are Hulk Hogan, Arnold Schwarzenegger and Danny Trejo. If you don’t mind the crowds then it’s a great place for a spot of morning exercise.

The drum circle has been going for several decades, beginning as an impromptu thing but now much more organised. Hundreds of participants, usually talented amateurs, gather every Sunday evening around sundown, near the skatepark. Get involved, or just settle down at a distance with a jug of wine to get into the Californian beach vibe.

Traipsing Venice Beach’s boardwalk is a must-do really. Lined with stalls selling everything under the sun, street performers, snack-joints and bars serving alcohol and juice, it’s the ultimate in LA people-watching exercises.

Companies such as Trek America will get you there, click for more information on their various tours that cross through the Californian area.