You Are Here: Home » Lifestyle » Religions Change, But Beer And Wine Remain

The title of this article is a sentence by Harvey Allen

Johann Christoph Friedrich von Schiller was not onto something original when he said, “When the wine goes in, strange things come out.

” In fact, the Babylonian Talmud contains the passage, “In came wine, out comes the essence.”

This, I feel contains an even deeper level than von Schiller’s saying as the Talmud is essentially saying that a person’s essence comes out when s/he is drunk.

We all know of people whose personalities change when they are drunk and there seems to be an element of truth in both of these sayings.

I think that wine is a substance that affects most people if not on a daily (apart from the French), then certainly on a weekly or festive basis.

That heady beverage that Christopher Hitchens referred to as making, “other people less tedious,

and food less bland and can help provide…the slight buzz of inspiration when reading or writing,” is enjoyed by peole at formal events, family gatherings, religious events, social get-to-gethers and even in the quiet of the evening of a long day, together with your partner. 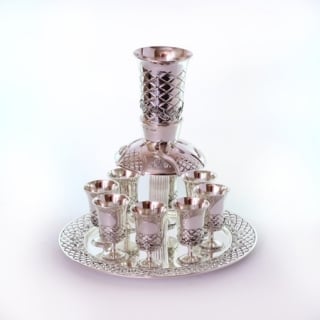 What interests me is the role that wine plays in different religions.

I, as an observant Jew, am aware of the central role that wine plays in Jewish ceremonies and meals.

Every week on the Sabbath evening I gather around the table with my closest friends and family and sanctify the Sabbath by blessing wine and drinking it.

This happens on the eves of festivals and at all religious celebrations and not by chance- wine is well-known for improving with age which is unusual for a physical entity.

It teaches that we-as human-beings- can also be refined despite our physicality.

Wine, in Judaism, represents the ability to fuse the holy and mundane.

Christianity also seems to embrace using wine in their religious ceremonies-the most famous of which is probably the Holy Communion in which wine is used to represent blood and bread to represent body.

A major component of Christianity, Holy Communion ceremonies are carried out by most denominations within Christianity- the ceremony entails a parishioner consuming the wine and bread.

An interesting point is that during the Prohibition period in the USA in 1920s when the production of wine was forbidden,

wineries were allowed to produce wine to be used in church services.

What does Islam say about wine?

It is quite fascinating that Judaism, Christianity and Islam are all known as Abrahamic religions, but whereas Judaism and Christianity allow the use if wine and even use it in religious ceremonies, Islam totally forbids alcohol consumption.

the Koran (the religious text of Islam) was observed and the Koran clearly states that wine consumption should be avoided due to the drunken behavior that can result from it.

Although, as with many religions and religious practices, not every Islamic individual follows the alcohol prohibition strictly, according to the Islamic religion wine is definitely a no-go.

The Complexities of Wine

Unfortunately, it is beyond the scope of this piece to go into all the different religions out there and their approach to wine but I did discover that a number of religions (among them Daoism, Confucianism, Buddhism and Hinduism) have a love-hate relationship with wine.

At times wine was prohibited in these religions but on the other hand it would also be used in religious ceremonies.

I think that this complexity is a reflection of the relationship mankind has had with wine since we discovered it.

This drink can be a wonderful way to unwind, relax and enjoy life with friends and family.

Unfortunately, it can also be the source of misbehavior, abuse and in the worst cases even death.

It is understandable, in some ways, the desire of individuals and even entire religions to ban wine but I do wonder if such an extreme position is really the answer.

Surely, as human-beings who possess the ability to make choices,

we should be looking at how to improve and make healthier our attitudes towards wine and other alcoholic beverages instead of turning a blind eye to the potential dangers but also potential wonders that wine presents us with?!

If you are looking for the perfect Wine Set or a fine silver wine cup, you are most welcome to visit their website: www.Ajudaica.com